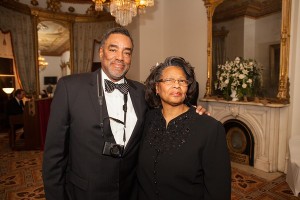 On February 7th of this year, on what would be Mr. William Culbertson’s birthday, guests met at the Mansion to honor New Albany citizen Marcia Booker with the Benevolence Award. Mrs. Booker is the President of Community Women for Unity and Equality, a volunteer group organized to “lend hands and hearts” to those struggling in the community.

“As we look back into the history of Mr. Culbertson’s giving, we see his legacy as a lifetime of fellowship and benevolence. It’s in this same spirit that by giving this award, we extol the virtues of being a good citizen – to genuinely care for people, to help where and when you can, and to improve your own community, without being motivated by recognition or profit,” stated Jessica Stavros, Director of the Culbertson Mansion. 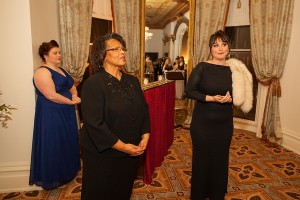 Previous recipients of the Benevolence Award include Barbara Zoller for her work on New Albany’s Bicentennial Celebration and Steve Anshutz for his Building Registration project at the New Albany Floyd County Library.

“We too recognize Mrs. Booker’s kindness and leadership in service to our community. On behalf of City Hall, we congratulate Mrs. Booker on being the recipient of the 2015 Benevolence Award at the Culbertson Mansion. We also thank her for her efforts to make New Albany a kinder and better place to live,” stated Mayor Jeff Gahan.