Mayor Gahan has been working with internet and technology experts in order to make the Coyle site the first residential apartment complex in Southern Indiana with gigabit-speed internet
connectivity. 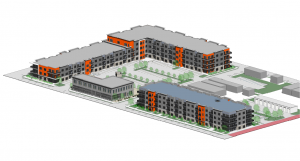 The Coyle Project will redevelop two full blocks of the former Coyle Chevrolet property on Spring Street in New Albany into a nearly 200 unit upscale apartment complex on a site that has sat vacant for nearly a decade. Construction is anticipated to begin in late summer of 2015, with an anticipated construction time period of 18 months.

The project is expected to have a direct construction cost of over $15 million. The financial analysis of the project indicates an economic impact expected to exceed $30 million over a 5 year period, while creating approximately 100 new jobs from the project.

Today, the New Albany Redevelopment Commission moved forward with the first step in financing the public-private partnership between the developer, Flaherty Collins, and the City of New Albany. Earlier this year, Governor Mike Pence and the Indiana Economic Development Corporation awarded a $3.3 million credit towards the project, stating that this redevelopment is a great project for the State of Indiana and the City of New Albany.